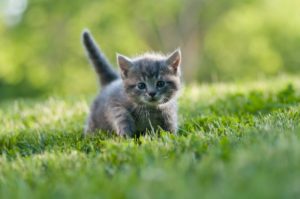 Q: I have a male and a female Sphinx cat, which I have been hoping to breed. However, Mother Nature doesn’t seem to be cooperating. I was wondering if there is such a thing as the female’s cycle being out of sync? Sheta gives all the signs of going into heat. She starts with what seem to be contractions for several days and the vulva is watery, then her teats begin to fill out, but she’s not ready to receive the male. When all this has passed, about a week later or so, then she is receptive to the male, but has no noticeable vulva readiness. I know they have linked, but don’t know if they have tied long enough. They are both almost two years old and have bred several times but still nothing. The cats, by the way, have free roam of the house and are not confined. Perhaps this is not the optimum way to get the job done. A dog breeder has suggested the possibility of the female cycle being off and I was wondering if she might be right (assuming dogs and cats are similar in regard to breeding). Any suggestions are greatly appreciated.

A: You may have a physical problem with the male or female, or a problem with the cycle timing. You may consider having the male’s semen evaluated for numbers and vitality. Male semen inadequacy is very common. If the female is not behaviorally clear when she is in heat, you may be missing the prime period of her cycles. Different than dogs, queens are induced ovulators, which makes it less crucial to breed at a precise time. I recommend thorough general physical examinations and breeding examinations by your veterinarian. Your veterinarian my wish to keep both for more than a day to collect semen samples and vaginal smears. Although cats can be hormonally manipulated to synchronize breeding, and queens can be artificially inseminated, you should look for the obvious problems first.

Q: I have two female poms that are sisters. They are both over one year old, and have not gone into heat yet. When does this happen? I do not want to breed them, but I am curious about when this will happen since they spend a lot of time outdoors.

A: Pomeranians usually experience their first estrus cycle between six and nine months of age. The first heat is often quite mild, and easy to miss. If you are not planning on breeding, please have them spayed soon to avoid unwanted pregnancies.

My dog never got his testicles. Is this ok?

Q: During the six week check of our Siberian Husky Puppies, the vet stated that both of our male puppies were bilateral cryptorchids. Should we accept his diagnosis or is there a chance they will descend at a later age?

A: When a puppy is born, the testicles are retained in the abdomen. They usually descend into the scrotum between four and ten weeks of age. Although their testicles had not descended at six weeks of age, do not be distressed. Wait at least until twelve weeks of age to make any determination of abnormal testicle retention. If the testicles have not descended by four months of age, the puppy should be castrated, which may require an abdominal surgery, similar to spaying a female. Retained abdominal testicles can cause many serious problems if not removed.

How rare are twin foals?

Q: I have this friend who a vet told that his mare will be having twins within the next two months. What is the chance that all three (the two babies and the mare) will make it through? I don’t know the age of the mare but I would like to know some info about this situation.

A: Pregnant mares usually produce a single foal. Twins are much less common, yet successfully occur every day. Mortality in foals is higher for twins than in singles, due to spatial and nutritional limitations during the pregnancy. If twins are recognized during pregnancy, your veterinarian can recommend special nutritional supplements which will help all three survive. As you approach the parturition date, make sure you monitor the mare closely, and you have the phone numbers for veterinarians 24 hours a day. Your veterinarian should be present in case of complications during birth. With a healthy pregnancy, proper diet, and veterinary assistance, your chances for success are excellent.

Q: My dog is pregnant and has lost a lot of weight. Is this normal?

A: The very first week after conception a dog may lose weight slightly. Thereafter, for the entire 63 days of gestation, the dog should gain weight every day. A pregnant bitch may shift her weight, as her abdomen and mammaries swell, her back and shoulders appear thinner. If your dog is truly losing weight in mid pregnancy, she should see her doctor as soon as possible. As in humans, dogs may experience a variety of problems and complications during pregnancy.

How to I tell if my Pug is pregnant?

A: A female dog must be in heat and receptive to conceive. Just because they were together doesn’t insure a successful mating. When dogs breed, they form a tie, being stuck together in coitus for fifteen to thirty minutes. The gestation period is 62 days. During the first half of pregnancy, she will not change in appearance. A progesterone analysis test can indicate if a successful ovulation has occurred in early pregnancy. After the first month, you may be able to detect an abdominal enlargement, mammary gland enlargement, and changes to her pelvis. In late term pregnancy, the mammary glands are obviously full, and she may show nesting behaviors. After the first month, your veterinarian can perform an ultrasound or perform a blood test to determine pregnancy.

My dog is pregnant. How long until we get puppies?

Q: I have a two year old cross between a hound and a collie. She has just mated with a sheltie collie dog. My question is how long do they actually carry babies and what are the signs that she is just hours away from delivery?

A: The gestation period for dogs is 61 to 63 days. Mothers will dig a hole in the yard, or build a nest in the house prior to parturition. The mammary glands fill with milk, and may even leak milk from the nipples the final week of gestation. Mothers become nervous and spend much time licking their vulva just prior to delivery of the puppies.

How do I tell if my cat is in heat?

Q: My question is about cats in heat. I think that my cat is in heat, because she acts really funny and she meows a lot more than usual. Plus she’s always licking her self and looking for something that she can rub on. I was told that if she doesn’t get a man she might die, because of the desperation of not having sex. Is that bad? Or can I get her neutered while in heat? What can I do? Please help.

A: She may be in heat, or she may be in pain. If she stiffens and squats when you scratch her back, meows at night near a window, and otherwise eats and acts normally, she is likely in heat. Be careful not to let her go outside, for she could get pregnant. The heat period should pass in one week.

Take her to your veterinarian to be spayed to avoid an unwanted pregnancy. Sometimes cats meow and act different when they hurt. She may have a sore leg, belly ache, or fever. Consider having your veterinarian examine her if she is not clearly in heat.

My Mare is pregnant. How long until foaling?

Q: My friend’s horse was suppose to have its baby on Jan. 28 and it’s Feb. 25. Then the vet said it should have it on March 1. He also had said that it would have it on Feb. 2 but he was again wrong. What should I tell my friend?

A: Not knowing your friend, I would bet the vet is correct. If you know the breeding date of the mare, you can determine the delivery date more precisely. The gestation period of the mare is 336 days. A veterinarian can rectally palpate a mare to feel the foal’s size and position to aid in delivery date prediction. Horses are rarely more than just a few days late or early. If the mare looks fine, eats well and acts normal, she couldn’t be a month overdue.

Q: I would appreciate some information concerning side effects from taking the drug Estratest.

A: Estratest is a tablet medication made for humans. Each tablet contains a combination of synthetic estrogen and methyltestosterone. These are reproductive hormones. The estrogen helps promote development of the vagina and uterus, while the methyltestosterone promotes development of the male reproductive organs. It’s uses include pregnancy maintenance and treating vasomotor problems related to menopause. Long term, continuous use increases the likelihood of liver, breast and cervical cancers.

How can I tell a true from a false pregnancy?

Q: Is there any way for someone (non-vet) to differentiate between a real pregnancy and a false pregnancy in a dog?

What caused my lactating dachshund to get Eclampsia?

Q: I have a mini-dachshund who just gave birth to six puppies last Saturday. She has had several litters before and the last three times, she came down with a case of eclampsia. Needless to say this was quite an alarming scene. She seems to be alright right now but I’m worried. I know how to tube feed, and was wondering when I should remove the puppies from her. I ideally would like to do it as soon as it is prudent to do so, to try to avoid a relapse, as it can get pretty expensive to treat this condition. Is there a chance that she may get this even though I remove her from the puppies? Does the nursing hurry the onset, or does the mere fact that she is lactating predispose her to it regardless of whether the puppies are nursing or not?

A: Eclampsia results from a deficiency of calcium. Muscles need calcium to contract properly. A lactating bitch looses much of her calcium to her milk, becoming vulnerable to low blood calcium. The body has mechanisms regulated by the parathyroid gland to extract the vast stores of calcium from the bones when needed. Sometimes the dog cannot get the calcium from the bones fast enough to keep up with the sudden draw of calcium for the milk. The result is knotted muscles and cramps. The cure is calcium supplementation.

A good preventative is to give pregnant dogs oral calcium supplements, and to continue calcium support through weaning. Calcium is available in many forms: milk, puppy chow, calcium tablets, antacids, and calcium powder.

How soon after giving birth can my cat be spayed?

Q: I am the owner of a part Burmese cat over here in Australia. My problem is, how soon after she has kittens, do I get her desexed? I was not quick enough after her first litter and she now has a second. They are about six weeks old now and I am afraid of her being pregnant again.

A: Cats can become pregnant within months of giving birth. Although a cat can be spayed at any point, it is best to wait until the litter of kittens is weaned. The mammary glands and uterus will be much smaller then, making the spay easier and safer. Specifically, six to 10 weeks after giving birth your cat can be spayed.