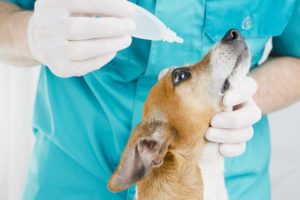 Q: Our one-and-a-half year old dog was diagnosed with blastomycosis in September. After nearly three months of being on the drug Sporanox, it appears that he may be relapsing. Our vet has told us that here is no definitive test to show whether or not the disease is returning. We are supposed to give the dog two more weeks of the medicine and feel very frustrated as the lack of answers we are getting. Any suggestions?

A: Blastomycosis is a fungal disease common to the East Coast of the United States. It is extremely rare to find a case in California. A dog becomes infected by inhaling the fungal spores, which set up the infection in the lungs. A fungus is a plant that produces spores, which are like its seeds. When the fungus dies, the spores may live for many months before growing more fungus. The disease is difficult to treat because the spores are highly resistant to medications, and almost impossible to detect. Once the fungus is eliminated, a single viable spore can start the whole infection all over again. Blood tests and x-rays are often beneficial in keeping track of an active fungal infection. However, a single dormant spore deep in the lungs is not detectable by these tests, so it may appear as though the fungus is gone, when spores remain. A typical treatment regimen is similar to cancer therapy. Initial long term aggressive treatment, with several years of surveillance tests and treatments is necessary.

Is there E. coli in my horse’s water?

Q: I am an 11 year-old doing a science project on E. coli (from horse feces) in horse drinking water. A laboratory has already tested the water and found E. coli in amounts dangerous to humans in one of my water samples (from a water bucket). What can this do to a horse’s health? Is it a sign that possibly other parasites are in the drinking water? Is it a risk to the handler of the water? I appreciate your help.

A: E. coli is a bacteria that naturally occurs in high numbers in all horse feces. As part of the normal flora of horses, it does not cause problems in the lower digestive tract. If the feces contaminates water or food, the bacteria may produce a harmful toxin. This toxin is dangerous to horses and humans. Cleanliness and disinfection are the best preventative measures to take. Household bleach destroys the bacteria, and can be used in the diluted form to clean your horse’s water system. Daily cleaning and weekly disinfection is a common routine. Humans would only be at risk if they drank the E. coli contaminated water.

Is E. coli from pets a problem for children?

Q: Our friends have a two month old baby boy. He contracted an E. coli infection that their doctor implied may have come from their dog. How much of a concern is this disease to our family?

A: E. coli is a bacteria common in the digestive tract of mammals, and is in high concentration in feces of dogs and cats. Inside a human or a dog, this bacteria, as part of the normal flora, causes no harm. However, certain strains of E. coli can produce potent toxins, which can be dangerous, even lethal. This occurs most commonly when food is contaminated by E. coli, and allowed to spoil at room temperature. Cleanliness, refrigeration and thorough cooking help protect us from the toxins. A child has minimal risk of E. coli problems directly from a dog. Fecal contamination of food, such as unwashed vegetables or a hot dog dropped in the yard, and eaten later by an unattended child is of much more concern.

What are the symptoms of Parvo?

Q: What are the symptoms of Parvo that I would see in my dog if he had the illness?

A: Parvovirus is a severe gastrointestinal disease. It initially causes weakness, depression, and lethargy. After a few days to weeks, it causes vomiting and lack of appetite. The dogs develop a very high fever. Very severe diarrhea ensues, gray in color, often with blood and tissue present. Because of the vomiting and diarrhea, the dogs become very weak and dehydrated. Puppies and dogs less than two years old may also suffer from heart disease caused by the virus, causing sudden death.

You should always wash your hands after handling any animal, including iguanas. You should take care not to contaminate areas with the iguana’s feces. If you do this, you are far more likely to get the E. coli food poisoning from an unclean fast food restaurant than your iguana.

My dog was coughing, now has bloody diarrhea

Q: My dog (a four year old beagle) has been coughing lately (about a week and a half). Also blood has been in his stool (jellylike along with diarrhea). He is about eight pounds over weight. What should we do to help him?

A: Your dog is very sick. The problems may or may not be related. A cough could indicate an upper respiratory tract infection, such as Bordetella or kennel cough. Heart disease, collapsing trachea, allergies and tumors are among the other possibilities causing the cough. The coughing alone warrants an examination by your veterinarian.

The bloody stool could indicate parasites, enteritis, cancer, or other serious problems. Linked with the coughing, Distemper and other serious infections become possible here. Again, you should have your veterinarian examine this dog as soon as possible. Be sure to have a fecal sample for your vet also, to expedite the checking for parasites.

What can I do for my sick wolf hybrid?

Q: I have an nine-year-old old German shepherd mixed with timber wolf. He has been in good health until lately. He’s lost several pounds, and his abdomen is very tight and is trembling. He doesn’t appear to be in pain but his hind legs seem very weak and if you pet his back his legs give out. Any ideas you have would be great!

A: The tense abdomen could indicate parasites, enteritis, stomach ulcers or other internal problems. Consider having a fecal analysis run for parasites, and treat only if necessary. The weakness is likely hip dysplasia or spinal spondylosis, both common in large breed canines. Consider using aspirin to help decrease the joint and bone inflammation. The enteric coated brands of aspirin made for sensitive stomachs are best for dogs. Regular aspirin can cause nausea.

Tell me about Feline AIDS, FIV

Q: My kitten was first tested positive for AIDS as a baby. When he was four months old he was tested again and it was negative…should I get a third test? Also, what is your opinion about breeding knowingly with an AIDS positive female cat?

A: Feline Immunodeficiency Virus, or FIV, is commonly referred to as Feline Aids. The similarity of human HIV and AIDS goes as far as diseases of the immune system, and not further. Feline AIDS, or FIV, is usually unnoticed by the pet owner, and affected cats live a long and normal life. It is a much milder immune system disease than HIV is in humans.

Feline Immunodeficiency Virus only affects cats, and is transmitted by direct contact. Infected cats show little or no clinical signs for their entire life. Once infected, a cat carries the virus for the entire life, and may pass it to other cats sharing the same household. When considering adding a new cat to a household, you should test the old and new cats to prevent spreading the virus.

Feline Immunodeficiency Virus attacks the immune cells of the cat, reducing its ability to fight off infections. Outdoor cats and feral cats have more trouble because of this virus, for they are exposed to more germs, and need a stronger immune system. Cats that contract concurrent diseases, such as leukemia, have a much harder time with the disease because of their compromised immune system.

There is no treatment or cure for the disease. Cats that test positive should not be allowed to go outside to protect them from outside infections, and to prevent them from spreading this disease to other cats. If you have a know positive Feline Immunodeficiency Virus cat, you should not bring in another cat into the same household, and you should not breed infected cats, for their offspring will carry the disease also.